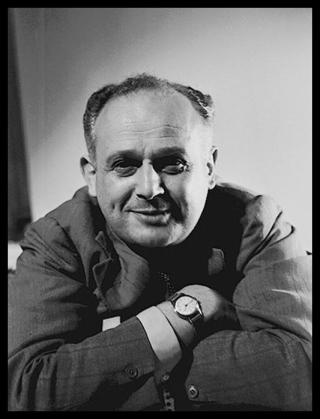 Feldenkrais was born in what is the Ukraine today and spent a part of his childhood in Belarus.  At the age of 14 he went on a six-month journey alone to Palestine. He worked in the labor industry, went to school, learned judo as a form of self-defense.

It was after a serious knee injury while playing sports that he became his own subject of study. Thanks to his research and observations, he was able to walk again and his “method” was born.

He drew from his scientific knowledge as an engineer and doctor of physics as well as his high-level martial arts practice (Judo). But also, he was very interested in the development of the child and the way that the human being learns “naturally”, through play and pleasure.

Beginning with the principle that we function according to the image we have of ourselves… in other words: the image of a movement exists already in the brain before we even begin the gesture… he chose movement as his means for learning and for self awareness.

His group lessons (called ATM – Awareness Through Movement) consist of movements which are verbally guided by the teacher.  There is no “model” to follow, nor a “right” posture to be attained. Students learn from themselves how to find the most efficient way to move with the greatest ease. The lessons are designed and constructed in such a way so that often the student finds a more efficient way of moving in spite of him/herself (through sensation and awareness rather than through mental willing). As the student finds new ways of moving and of overcoming difficulties, the possibilities grow allowing one to be more adaptable so that our intentions and our actions become one.

Lessons often build on the idea of exploring the detail of a movement in order to put it in relationship with the bigger picture. Or the opposite, breaking down the global movement in order to understand its parts.  This corresponds remarkably to the work of a musician, both technically and musically.  Feldenkrais himself worked with artists such as Yehudi Menuhin, Narciso Yepes, and the theatre director Peter Brook during his lifetime and the Feldenkrais Method® is currently practiced in many music schools and by musicians around the world.

Moshe Pinhas Feldenkrais was born on May 6, 1904, in Slavuta, in the present-day Ukrainian Republic. When he was a small boy his family moved to the nearby town of Korets. By 1912 his family moved to Baranovich in what is, today, Belarus. While Baranovich endured many World War I battles, Feldenkrais received his Bar Mitzvah, completed two years of high school, and received an education in the Hebrew language and Zionist philosophy. In 1918 Feldenkrais left by himself on a six-month journey to Palestine. After arriving in 1919, Feldenkrais worked as a laborer until 1923 when he returned to high school to earn a diploma. While attending school he made a living by tutoring. After graduating in 1925, he worked for the British survey office as a cartographer. Feldenkrais was involved in Jewish self-defense groups, and after learning Jujitsu he devised his own self-defense techniques. He hurt his left knee in a soccer match in 1929. While convalescing he wrote Autosuggestion (1930), a translation from English to Hebrew of Charles Brooks’ work on Émile Coué’s system of autosuggestion, together with two chapters that he wrote himself. He next published Jujitsu (1931), a book on self-defense. In 1930 Feldenkrais went to Paris and enrolled in an engineering college, the École des Travaux publics de Paris. He graduated in 1933 with specialties in mechanical and electrical engineering. In 1933 after meeting Jigaro Kano, Judo’s founder, Feldenkrais began teaching Jujitsu again, and started his training in Judo. In 1933 he began working as a research assistant under Frédéric Joliot-Curie at the Radium Institute, while studying for his Ingénieur-Docteur degree at the Sorbonne. From 1935-1937 he worked at the Arcueil-Cachan laboratories building a Van de Graaf generator, which was used for atomic fission experiments. In 1935 he published a revised, French edition of his Hebrew jujitsu book called, La défense du faible contre l’agresseur, and in 1938 published ABC du Judo. He received his Judo black belt in 1936, and 2nd degree rank in 1938. Feldenkrais married Yona Rubenstein in 1938. From 1939-1940 he worked under Paul Langevin doing research on magnetics and ultra-sound. Feldenkrais escaped to England in 1940, just as the Germans arrived in Paris. As a scientific officer in the British Admiralty, he conducted anti-submarine research in Scotland from 1940-1945. While there he taught Judo and self-defense classes. In 1942 he published a selfdefense manual, Practical Unarmed Combat, and Judo. Feldenkrais began working with himself to deal with knee troubles that had recurred during his escape from France, and while walking on submarine decks. Feldenkrais gave a series of lectures about his new ideas, began to teach experimental classes, and work privately with some colleagues. In 1946 Feldenkrais left the Admiralty, moved to London, and worked as an inventor and consultant in private industry. He took Judo classes at the London Budokwai, sat on the international Judo committee, and scientifically analyzed Judo principles. He published his first book on his Method, Body and Mature Behavior in 1949, and his last book on Judo, Higher Judo, in 1952. During his London period he studied the work of George Gurdjieff, F. M. Alexander, and William Bates, and went to Switzerland to study with Heinrich Jacoby. Feldenkrais returned to Israel to direct the Israeli Army Department of Electronics, 1951 – 1953. Around 1954 he moved permanently to Tel Aviv and, for the first time, made his living solely by teaching his Method. He worked sporadically on the manuscript of The Potent Self, which he had begun in London. Around 1955 he permanently located his Awareness through Movement classes to a studio on Alexander Yanai Street in Tel Aviv. He gave Functional Integration lessons in the apartment where his mother and brother lived. In early 1957 Feldenkrais began giving lessons to Israeli Prime Minister, David ben Gurion. In the late 1950’s Feldenkrais presented his work in Europe and the United States. In the mid 1960s he published “Mind and Body” and “Bodily Expression.” In 1967, he published Improving the Ability to Perform, titled Awareness through Movement in its 1972 English language edition. In 1968, near his family’s apartment, he made a studio at 49 Nachmani Street as the permanent site for his Functional Integration practice, and location for his first teachertraining program, 1969-1971, given to 12 students. After giving month-long courses internationally, he taught a 65-student, teacher-training program in San Francisco over four summers, 1975-1978. He published The Case of Nora in 1977, and The Elusive Obvious in 1981. He began the 235-student Amherst training in 1980, but was only able to teach the first two summers of the four-year program. After becoming ill in the fall 1981, he stopped teaching publicly. He died on July 1, 1984. *

I have done my best to verify dates, names, and places, though I cannot guarantee their accuracy, due to limitations of information available and discrepancies between sources. This document may not be altered or edited. March 19, 2004